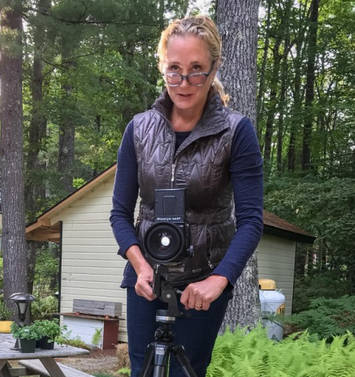 “The world enters our body via sensual portals: eyes, nose, ears, skin and nervous system, it is then translated by our brains into meaning and experience.” —Jocelyn Lee

Borrowing from the formal conventions of painting, Jocelyn Lee lends a certain temporal permanence to her subjects while maintaining the potency of the open ended photographic narrative. Manoeuvring back and forth between levels of intimacy and unease, Lee also purposely looks for spaces that are not to distracting, to encourage the viewer to focus on the individual and psychological exchange of the portrait for pertinent clues.

When she makes the picture, Lee prefers to wait for the moment when her subjects ‘breath their own life into the room’ and are no longer aware of the camera. Yet for all their transparency and brilliant details, her subjects, their stories, remain unknown, deftly eclipsing the camera’s attempts to capture them.

In addition to portraiture Lee trains her camera in landscape and interior photography. Consistent in her work is a focus on the visual and tactile qualities of the material world, emphasizing the chromatic and textural richness of flesh, fabrics, and foliage. Her fascination with the physical and psychological transitions of people has produced incisive portraits that capture the fraught passage from adolescence to adulthood, as well as the changes that aging registers on the face and body.

Beginning in 1990, Lee spent six years living with teenage mothers and fathers in Texas and Maine to document this social phenomenon as honest as she could. The result was a powerful record which she gave the title: The Youngest Parents: Teenage Pregnancy as it Shapes Lives (1997). Lee found herself in the documentary tradition of Walker Evans, Robert Frank, and Diane Arbus. Lee lives and works in Princeton, N.J., and Cape Elizabeth, Maine and lectures photography at Princeton University.

Jocelyn Lee (1962, Naples, Italy) received a BA from Yale University in 1986 and an MFA in Photography from the City University of New York at Hunter College in 1992.

Lee’s first monograph Nowhere but here was published by Steidl Publishers in December 2010 with a forward by Sharon Olds. In 1996 her work The Youngest Parents was published by DoubleTake Books and The Center for Documentary Studies at Duke University in collaboration with Robert Coles and John Moses.