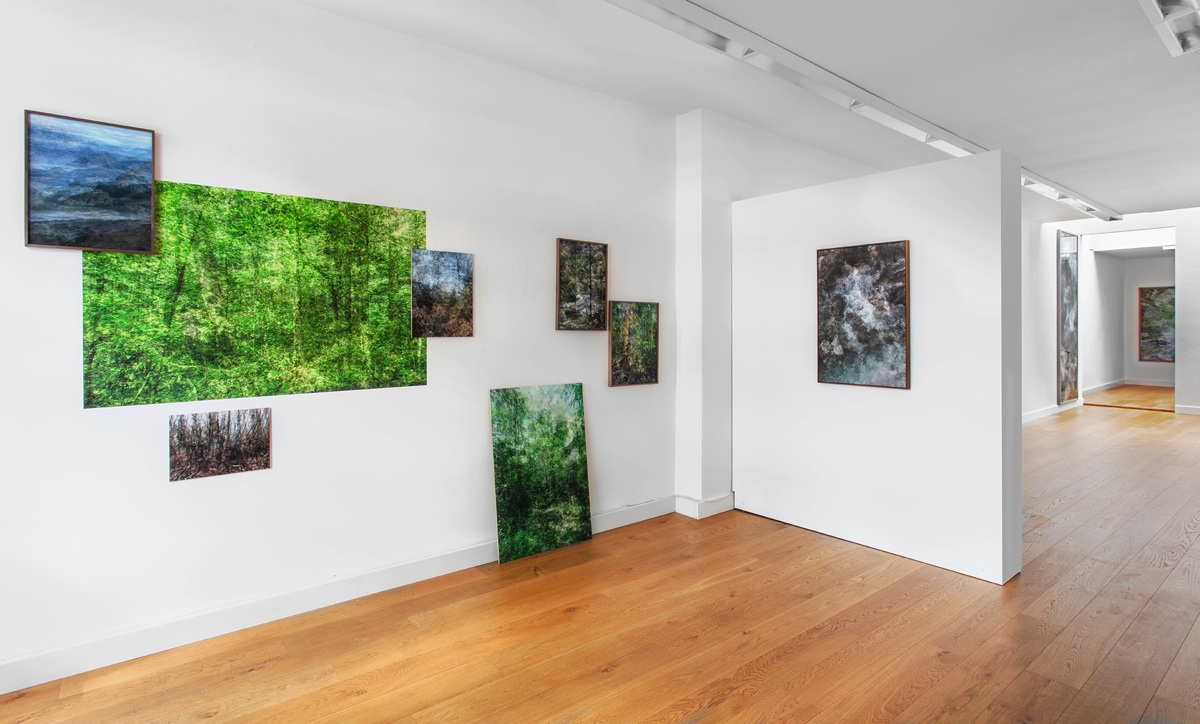 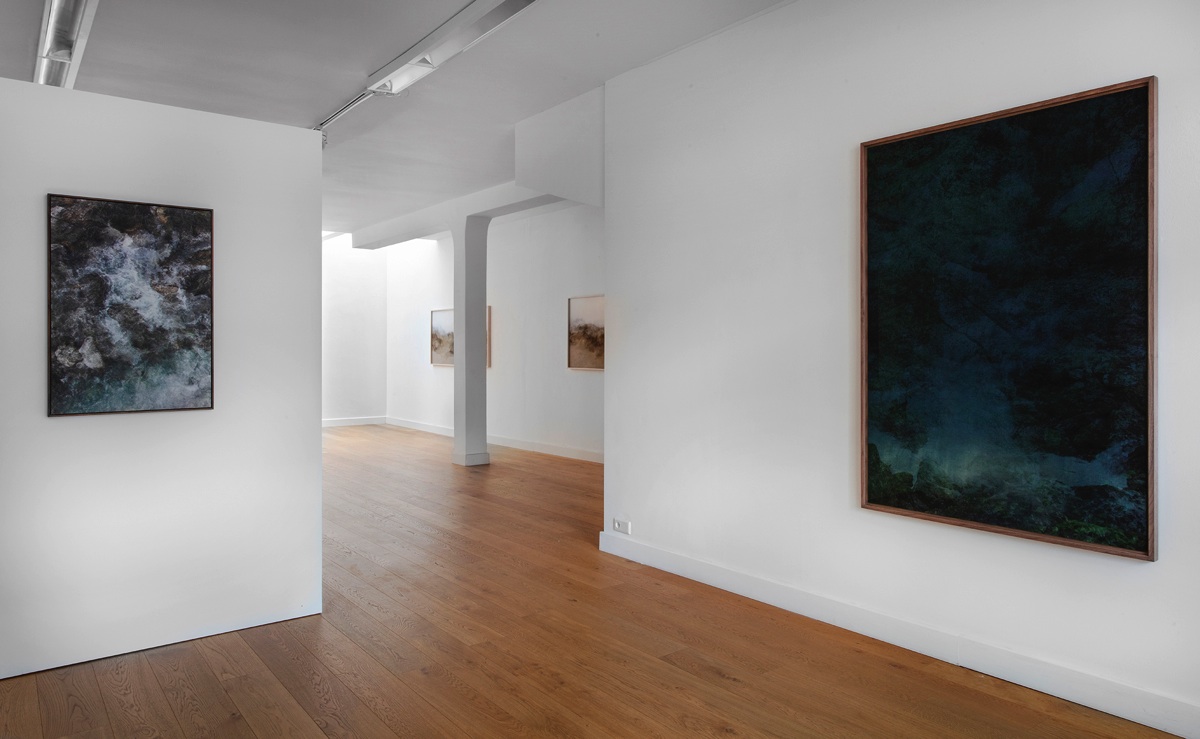 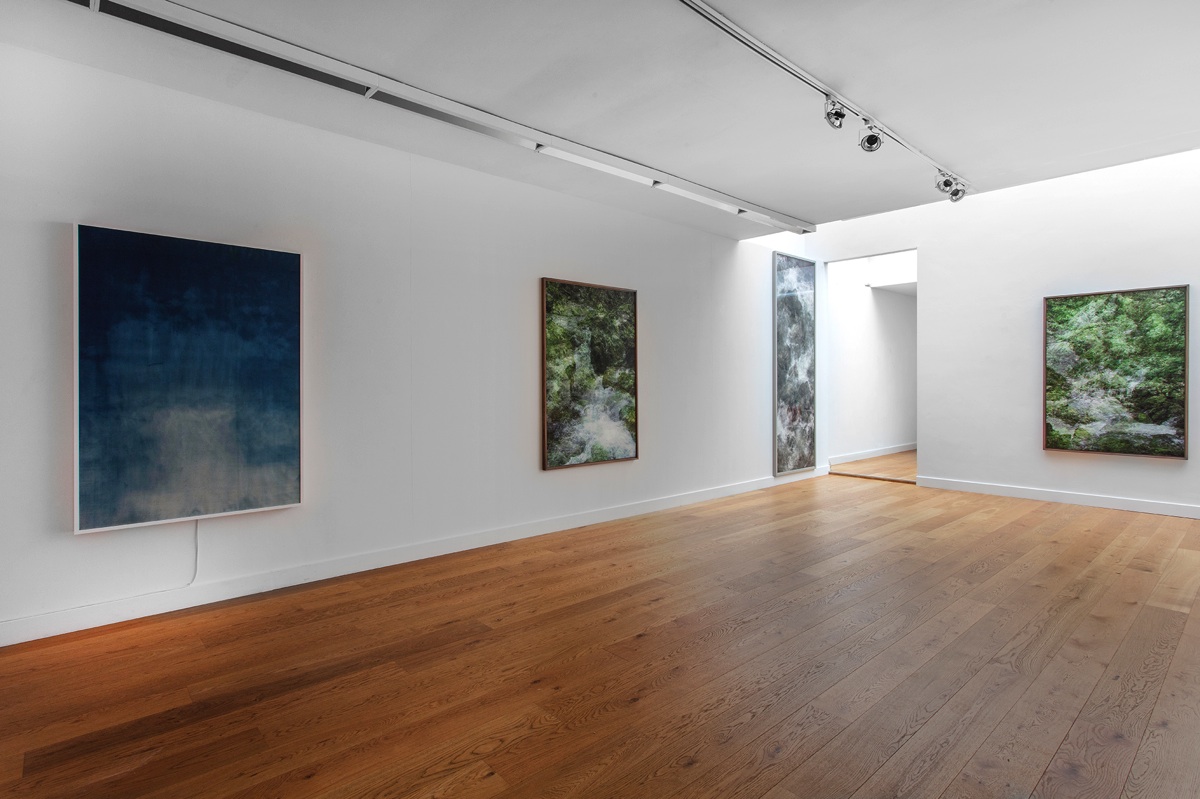 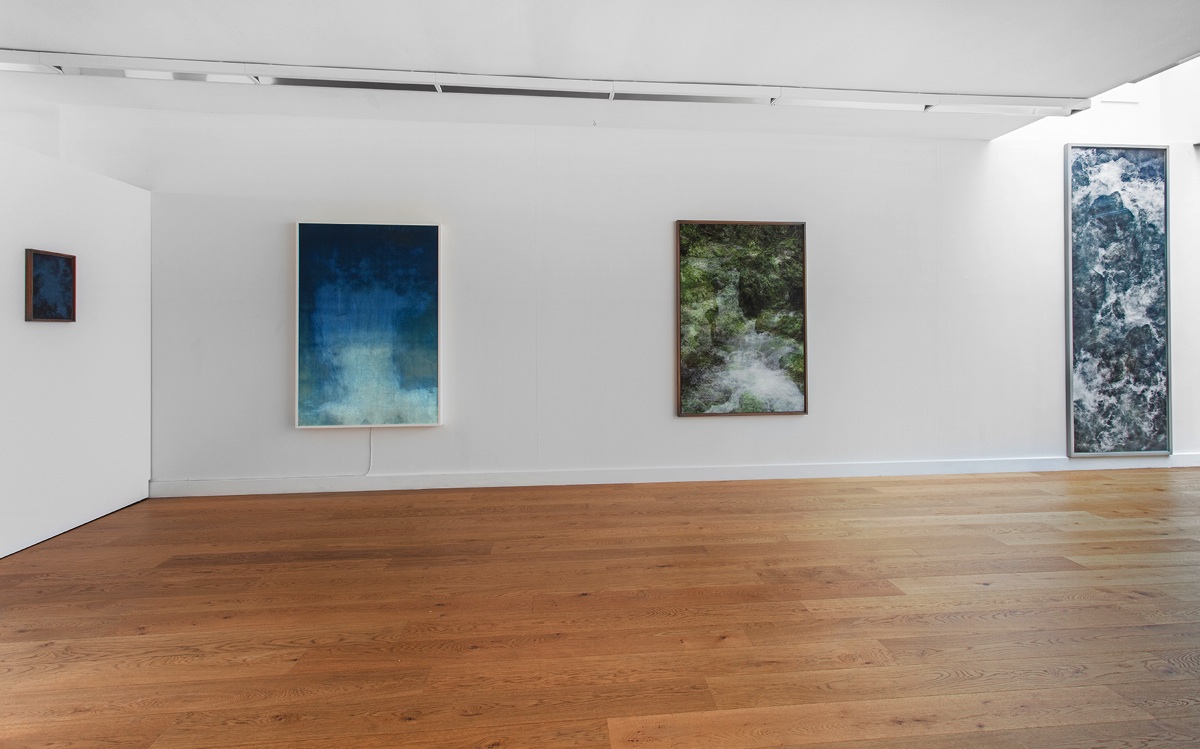 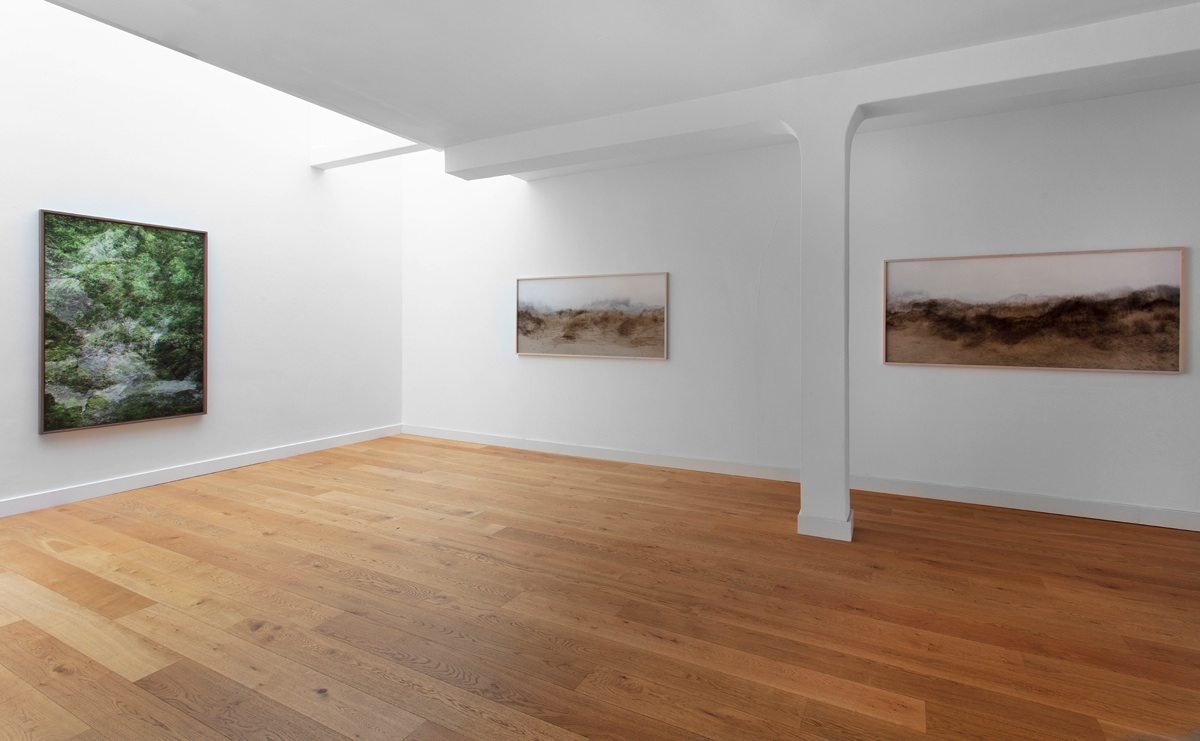 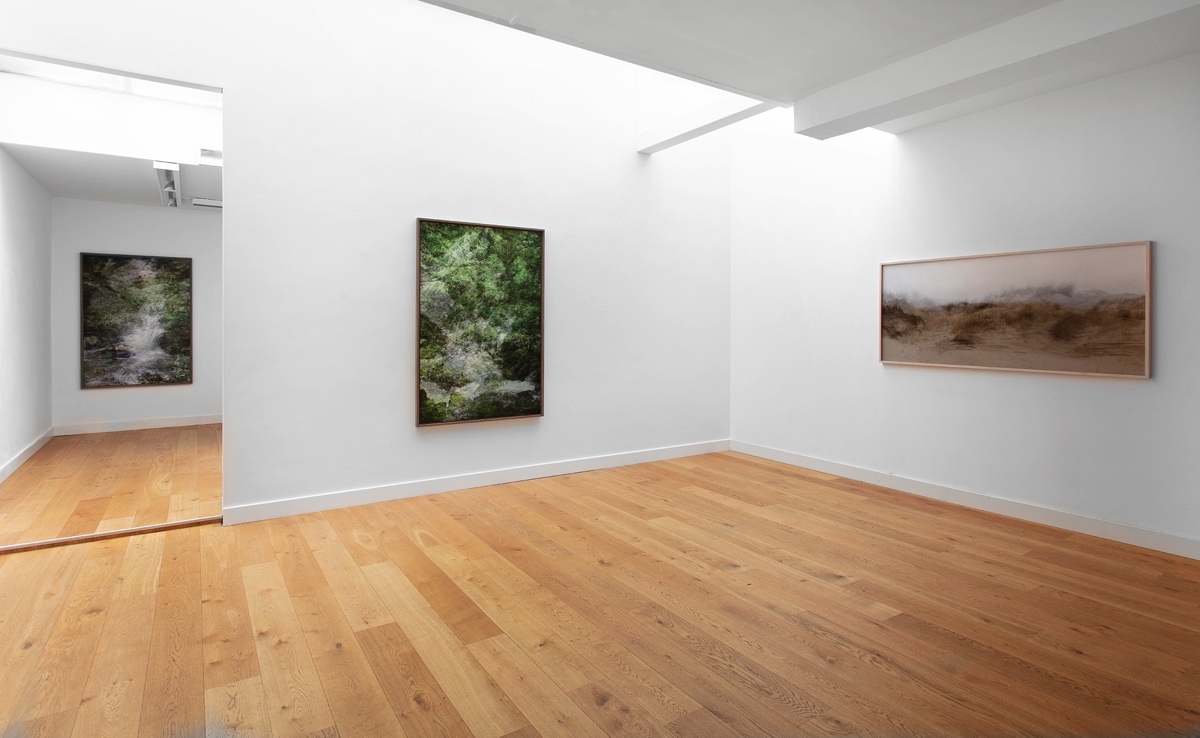 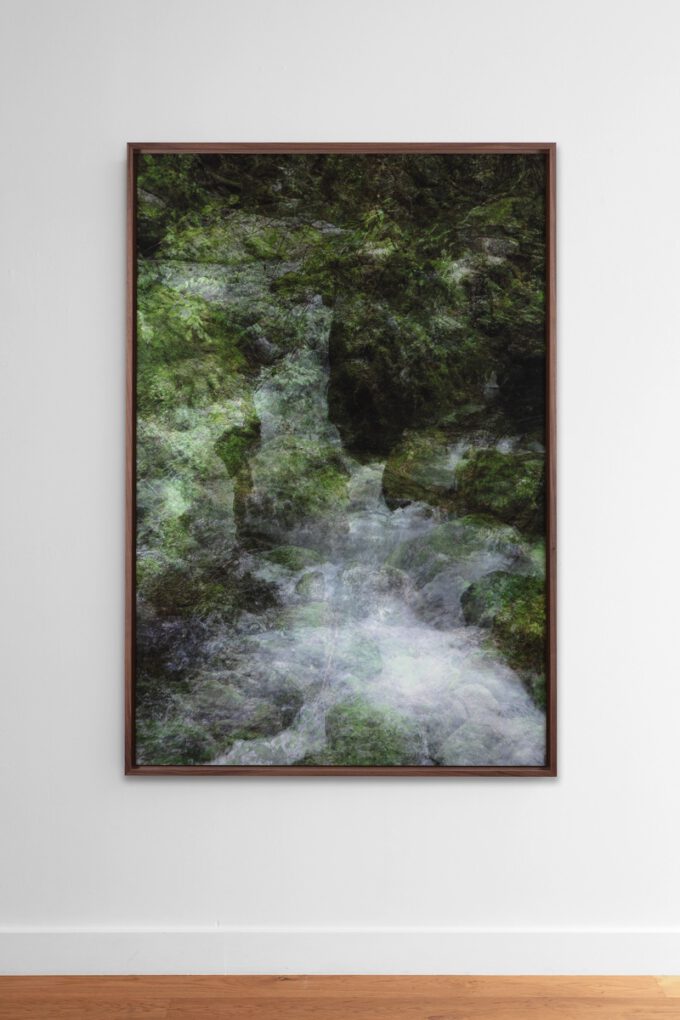 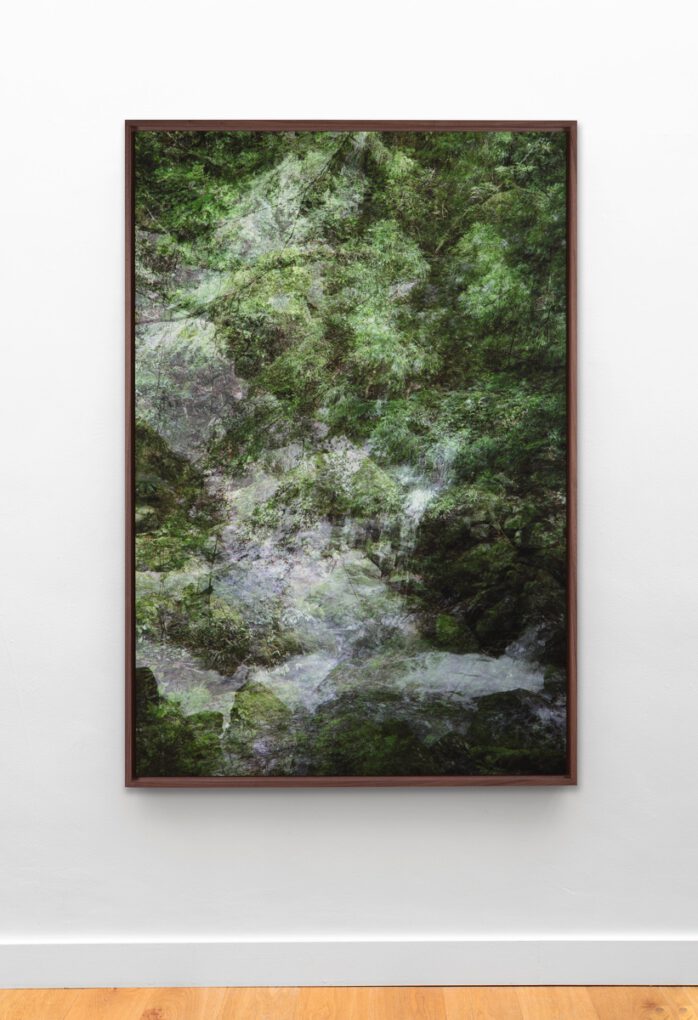 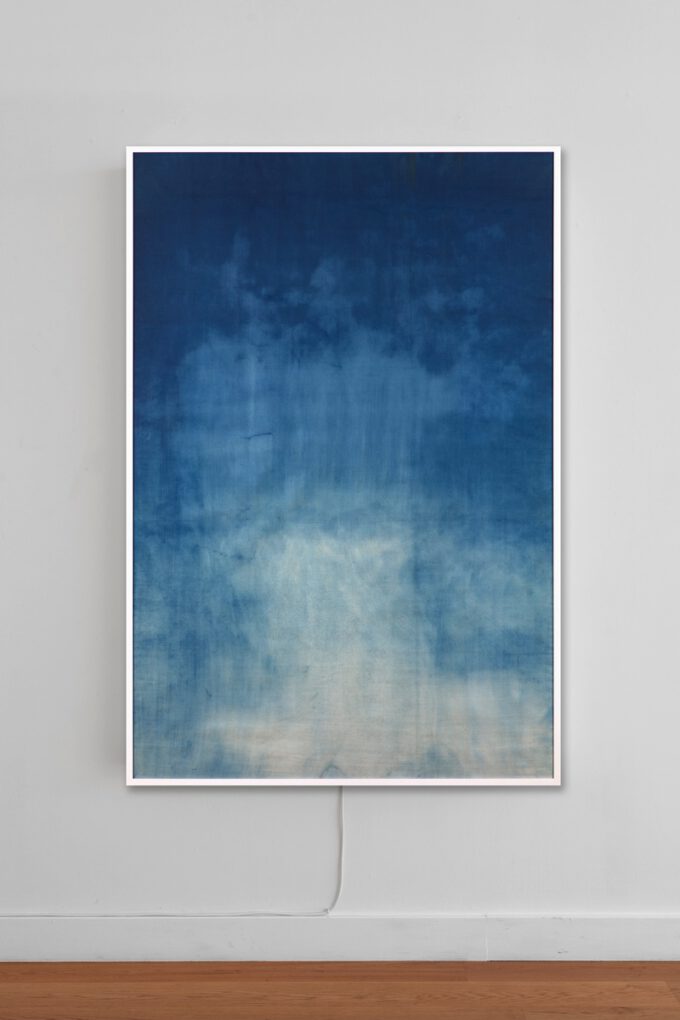 The walk in nature that artist Kim Boske (NL, 1978) invites us to take is intimate and slow. Here, surrounded by her works and accompanied by the soundscape, the pace doesn’t follow the usual rush we all know so well. And the focus doesn’t point at a specific moment in space and time but, instead, aims to embrace a multiplicity that would be hard to grasp without Boske’s skilful technique of photography and visual assemblage.

By going beyond the photographic media, which captures the “now”, Boske collects fragments of reality that are then layered into intricate and mesmerizing compositions which tribute the incredible complexity of the natural element, undisputed protagonist of her work.

On the occasion of her first solo show at Flatland Gallery, Kim Boske wants to challenge the way we look at the horizon - which is also called “Kim” in Dutch, by shifting the focal point from singular to multiple.
By abandoning the automatic process of preconceptions accumulated throughout history and the evolution of society, we are able to broaden our perspective on the world, regaining the totality of our experience as humans.

This effort towards the unlearning is something that has characterized Boske’s life from an early age.
After her childhood’s frustration caused by the impossibility of grasping the vision of a tree in its fullness, Kim started to explore the photographic media with the intent of overcoming the flaws embedded in the frontal focus point, by prioritizing a renewed perspective on nature, captured in its polyhedric and metamorphic essence.

Guided by the fascination over the passing of time and how this affects the natural element, Boske crafts poetic collections of instants, where the attention shifts on the process rather than the final outcome, on the becoming rather than the being. The philosopher Deleuze and the theory introduced in his “Rhizome” serve here as the ideological ground on which the foundation of Boske’s practice is based. Rather than sequencing history into a straight narration of facts, the Rhizome presents it as a map of attractions, a living mnemonic system which resists chronology and ramifies like a root structure.

While walking through the show, we encounter the installation ”Lockdown Traveling”. For this recent work, Boske asked a close group of friends to explore their favourite spots in nature. The familiarity the artist has with the people she invited to contribute plays an essential role in the final outcome, allowing Kim to combine images using a dual perspective: the first being of her friends observing the natural element and the second of the artist herself who combines the visual fragments into a colourful mosaic of experiences.

For the exhibition, Kim worked with electronic music producer and sound designer NAKANO BLU. The idea behind the collaboration was to create an atmosphere that immerses the viewer into a synaesthetic experience made of sound and visual fragments.

The approach followed by NAKANO BLU was to manipulate sound the way Kim does with photography.
By translating Boske’s technique of visual assemblage into a sonic composition, NAKANO BLU combined the recordings collected by Kim during her production process. This installation finds inspiration in the practice of Japanese composer Tōru Takemitsu and his compositions which resemble the experience of walking in a garden: the natural sounds, different in frequencies and textures, are blended together in order to generate an orchestral composition which constantly mutates.

The Japanese culture undoubtedly plays an essential role in Boske’s practice and fascination for the natural element. Over the years, the artist has visited the country several times, appreciating the traditions and philosophy of a land that has built a society in profound harmony with nature. On one particular occasion, the artist had the chance to witness the making of the Indigo dye, an ancient craft that is as complicated to reproduce as it is magical to experience. Through a delicate sequence of actions, the traditional blue ink is obtained from the leaves of the Indigo plant and subsequently absorbed on the washi photographic paper (Amagoi No Taki). A fragile balance of ingredients, timing and actions triggers a reaction in the blue color whose intensity constantly mutates just like a living creature, just like the natural subject portrayed in Boske’s works.

The large installation “Akui Gawa” is composed of 2 works, one vertical and one horizontal. They both show a fragmented assemblage of pictures of a river that Boske captured while standing on the several bridges that dialogue with the river. By showing the slightest changes in the rivers’ stream, the artist offers a glimpse into the transformation of the area and into the evolution of the communities that surround it.
The river acts also as the starting point of an analysis that touches upon several aspects of society, highlighting that, even while the human presence is neglected on a visual level, we still find ourselves observing the consequences of the human actions on the land.

Kim Boske’s “Dunes” series focuses on the Nordic Islands of the Netherlands and on how they used to be very erratic and changeable. Today, because of governmental actions to alleviate the problem of the shifting dunes, dunes were stabilised by planting. By looking at these vivid portraits of the dunes, we see their pioneering character come back forth. The disarming mutability inherent in the sand element seems to perfectly resonate with Boske’s visual research. Through her original technique of collages, the movement of sand and grey hair-grass turnes these static dunes to migrate, again.

While looking at Boske’s body of work, we manage to widen our perspective on the world, embracing a renewed multiplicity of the nature that surrounds us. We are finally able to leave behind the constant bombardment of informations ingrained in our contemporary existence. Far away from the urban noises we have left outside the gallery walls the only thing left to do is a silent and aware contemplation, with the patient eye that manages to settle on a new, slower pace. 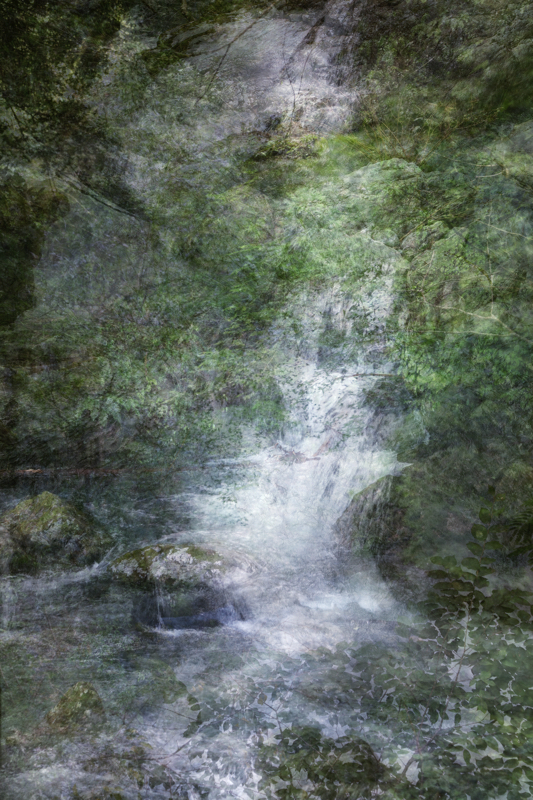 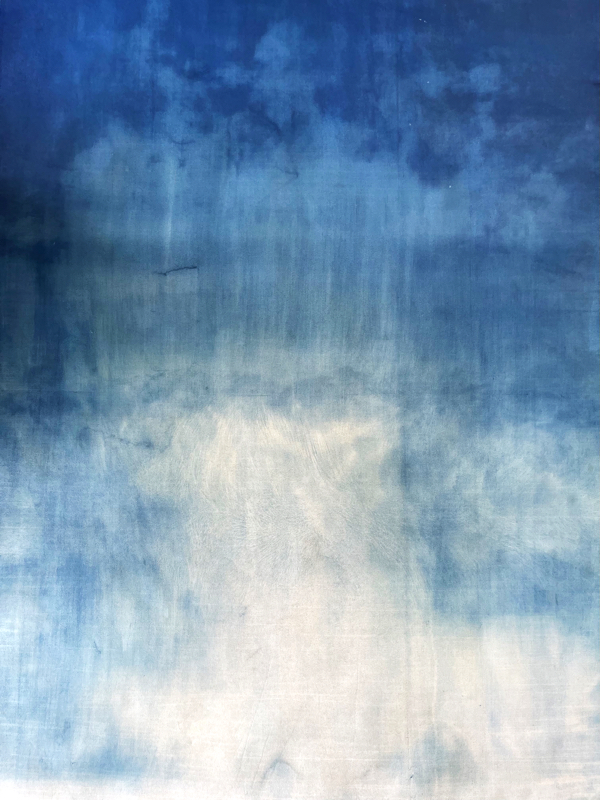 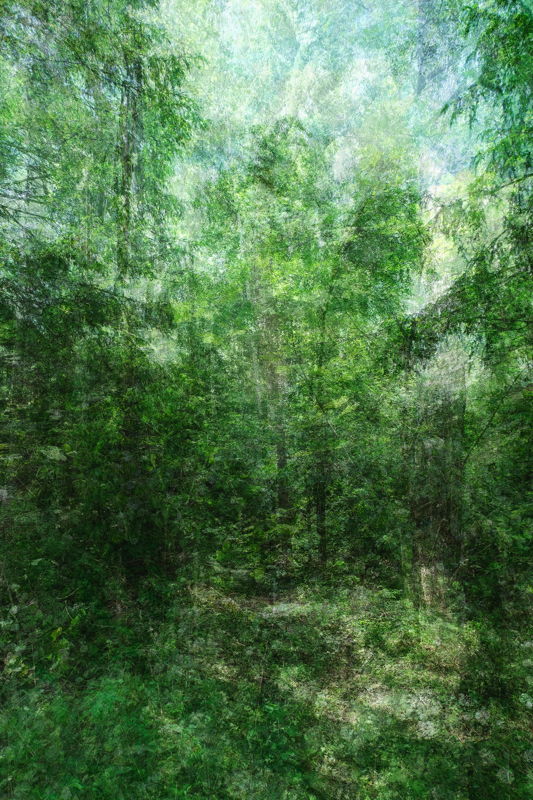 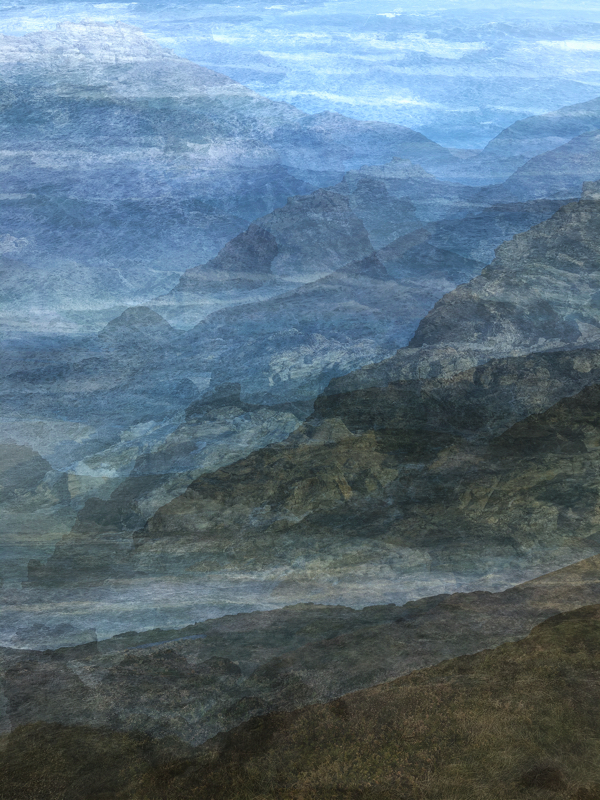