Established in 1983 by multi-genre professional musician-turned-art dealer Martin Rogge, Flatland is an Amsterdam-based gallery operating on an international scale. The gallery has been based since 2012 in the heart of art-rich Amsterdam—near the photography museum Foam, the Stedelijk Museum, and the Rijksmuseum—and is best known for representing innovative and international photographers. From this foundation, the gallery has expanded to a broader roster of contemporary artists using more varied media. Since 2015 the gallery is co-directed by Fiona van Schendel. In April 2020 Fiona has become co-owner of the gallery. 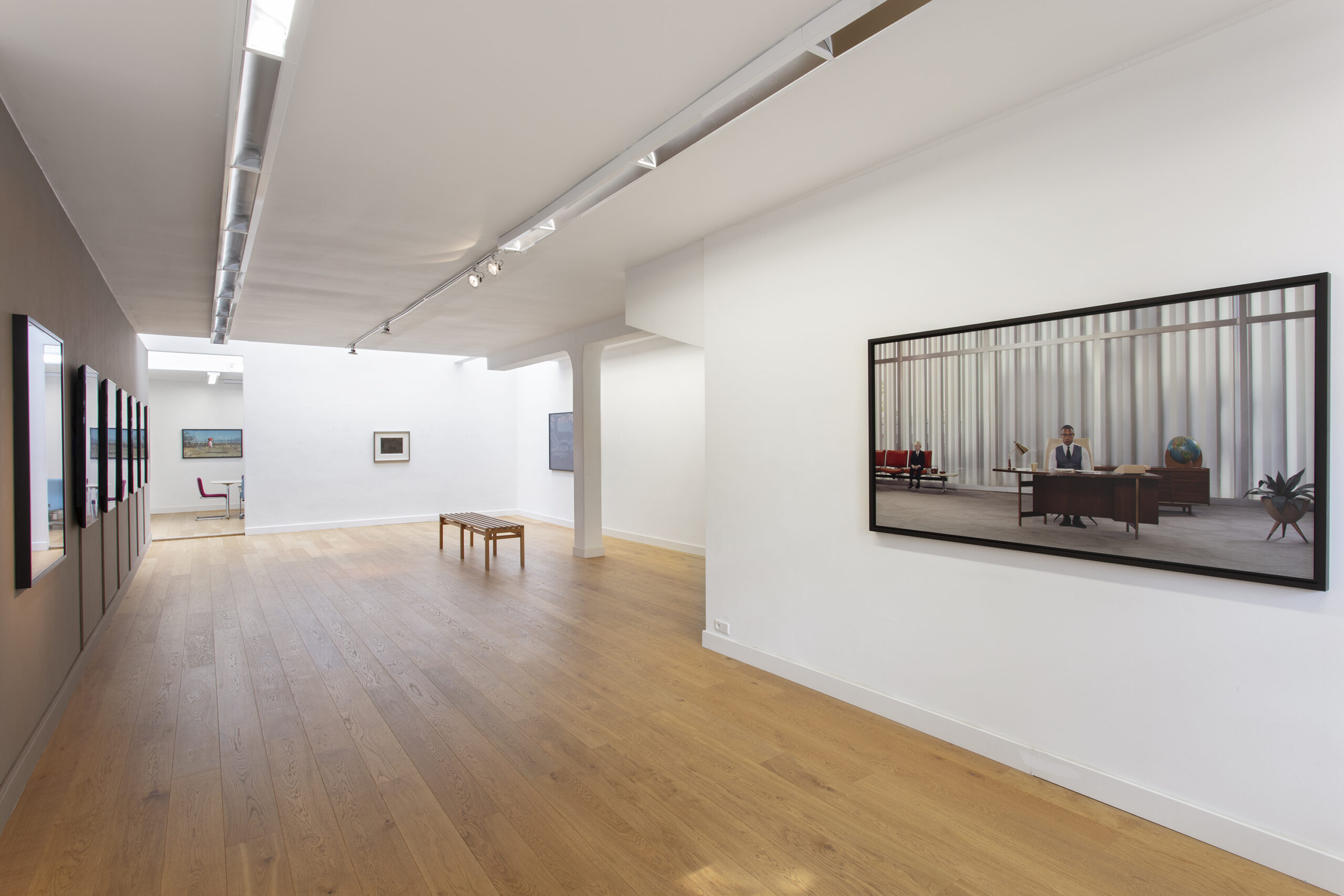 As part of its roster of artists Flatland Gallery represents internationally established artists such as Jocelyn Lee, Johan Grimonprez, Guy Yanai, Ruud van Empel and Paolo Ventura. Likewise the gallery represents young emerging photographers such as South African Katharine Cooper and has attracted talented artists such as Stelios Karamanolis and Alice Browne. In 2019 the gallery was very proud to have committed to the gallery, Jasper de Beijer and Kim Boske. Flatland regularly invites other artists to work with the gallery such as Alec Soth, Martin Parr, Ina Jang, Kim Boske, Inez van Lamsweerde & Vinoodh Matadin, Jan Steenman, Pinar & Viola and others.

Early years of the gallery
One of the first exhibitions of Marlene Dumas and the gallery was in 1984, The artist as a young girl (simultaneously with one of her first museum shows Ons land licht lager dan de zee at Centraal Museum, Utrecht). Another highlight is one of the first exhibitions of photographer Erwin Olaf, in 1987, who has been with the gallery ever since. In 2012 Olaf received the Johannes Vermeer Award 2011 - the state prize for the arts - for the high quality of his entire oeuvre. In 2018 The Rijksmuseum acquired 450 photographs by Olaf for its permanent collection. In 2019 3 major shows were dedicated to Olaf: Kunstmuseum Den Haag, Fotomuseum Den Haag and Rijksmuseum. Other early exhibitions at Flatland include shows for leading artists like Erik Andriesse, Rob Birza, F. Franciscus, Ronald Ophuis and Wim Izaks (to whom the Wim Izaks Award is allocated).

Video, Film, Installations
Since the eighties Flatland experimented with the convergence of art with film, music, video and multimedia installations. Flatland brought in 1997 the club and art scene together at the KunstRai (nowadays Art Amsterdam) with the installation The White Room, Part II, by pioneer of veejay-ing, the artist Micha Klein and photographer Danielle Kwaaitaal. Other multimedia artists at Flatland were Dutch pioneer of video art Lydia Schouten, A.P. Komen & Karen Murphy and video artist Rob Johannesma.

Other developments
In 2005 Flatland started representing Ruud van Empel. Beginning 2009 four solo-exhibitions of Van Empel were held in New York, Tokyo, Düsseldorf and Paris. In 2007 sculpture artist Carolein Smit joined Flatland Gallery. In 2010 she received a request from the prestigious Manufacture National de Céramique de Sèvres in France. A large solo show was held at the Kunsthal Rotterdam beginning 2010. In 2011 her work was included in the Olbricht Collection, Berlin. Carolein Smit exhibited twice in Maison Rouge in Paris. Her work is also included in the collection of the Victoria & Albert Museum, London where she received a solo show in 2018.

Dutch documentary photographer Rob Hornstra has been with the gallery for 10 years. Hornstra’s five year project on Sochi (The Sochi Project) has culminated in 2013 in worldwide exposure, from Time Magazine, Euronews to the Russian news site Lenta.ru. In 2010 Jaap Scheeren joined the gallery. In 2011 he won the Bouw en Beeld Award that resulted in a museum show in the Cobra Museum, Amstelveen.

Since 2014 the gallery represents Katharine Cooper, a South African photographer who received the Photography prize of the Academie des beaux-arts’ for her documentary on the white minority in South Africa 'White Africans. a journey to the homeland'. Since 2016 she worked in the Middle Eastern regions (Syria and Iraq). A selection of her work from the Middle East has been selected for the exhibition ‘Chrétiens d’Orient. Deux mille ans d’histoire’ at the Institut du monde arabe in Paris in 2018. In 2019 Cooper has a solo show at Kunsthal Rotterdam on her African series.

In 2015 Flatland started working with Dutch photographer Anoek Steketee, who is nominated for the 2015 Prix de Rome. Steketee exhibited her work recently in the 'On the Move photography' exhibition at the Stedelijk and FOAM: a trans-medial project, about the process of reconciliation in post-genocide Rwanda, based around a popular radio soap. In 2015 she was also offered the assignment of the Rijksmuseum ‘Document Nederland’. The project of Steketee was exhibited in 2017 in the Philipsvleugel of The Rijksmuseum.

Another notable Flatland artist is the energetic Israeli painter Guy Yanai (1977). Yanai lives and works from Tel Aviv. Influenced by a variety of ‘Masters of Art’, from Matisse to David Hockney, (yet also by contemporary photography, television, paintings, and advertisements) Yanai portrays an intimate and personal environment in his paintings that include ordinary everyday items and simplified forms in vibrant colours. Being on the edge between figuration and abstraction, the work is nearly timeless, between real and fake, consequence and insignificance. The most recent artists that joined Flatland are Kim Boske and Jasper de Beijer. Director Fiona van Schendel: ‘I have wanted to work with her for many years; I enjoy how her images are built up layer by layer, referring to time as something fluid. Past and present as time elements have no real meaning'.
The gallery is also delighted that Dutch artist Jasper de Beijer joined Flatland. De Beijer is seen as a leading figure of expanding the language of photography. He is celebrated for his scale scenes and carefully assembled tableaux as material for his photographic images. In 2019 De Beijer received an exciting solo show at WIELS, Brussels, engaging visitors in a VR - environment.

Besides artist books, Flatland published three times a year The Flatland Journal with contributions from art critics of Le Monde and The New York Times. The circulation was exclusive but nonetheless covered a broad, influential spectrum of readership around the world.

Owner Martin Rogge comes from a musical family, his grandmother and father played the piano professionally and his uncle played the violin in the Royal Concertgebouw Orchestra. At the age of nine he started studying the violin. Before he started the gallery at the age of 28 in 1983, Martin played the violin, saxophone and keyboards as a professional musician in an orchestra and an ensemble as well as in a rock band, a jazz band and a folk band. Martin Rogge was a member of the jury of the Sony World Photography Awards 2009 and a jury member of the Black and White Spider Awards. In 2013 he became a jury member of the International Kontinent Photography Fair award. Martin manages artists' careers and carries out art advisory functions for private, corporate and museum collections. In 2015 Fiona van Schendel joined the gallery as Director. She holds a MA degree in history from the University of Amsterdam and worked as historian at the International Institute for Social History, during which she published her book on plantations in the Dutch East Indies and received a PhD fellowship in international labour relations. Prior to working for Flatland she worked as an independent journalist/writer for newspapers and magazines. In April 2020 she became co-owner of FLATLAND. The duo is fortified with professionals in the field of the arts. Senior member is Pieter Sanders, director at Aventory and Advisor at Nieuw Dakota. Assistants of the gallery are Josephine van Schendel (graduated cum laude at the Royal Academy of Art, The Hague in 2018 and currently student at the Sandberg Instituut) and Renée van Zadelhoff (currently student at the Gerrit Rietveld Academie).

The gallery also works with external professionals. Julie Joliat is a Swiss graphic designer based in Zurich. Her portfolio includes "pig 05049" with Christien Meindertsma, work for the house of Hermès and catalogues for l'école des beaux-arts de paris.

Connected with the gallery and of invaluable value is Paul Bonnike, who heads his own agency Bonnike executive recruitment and is a valuable partner for Flatland in a wide range of matters.

Flatland Gallery is member of the KKR (special loan agreement for art buyers) of The Mondriaan Foundation.